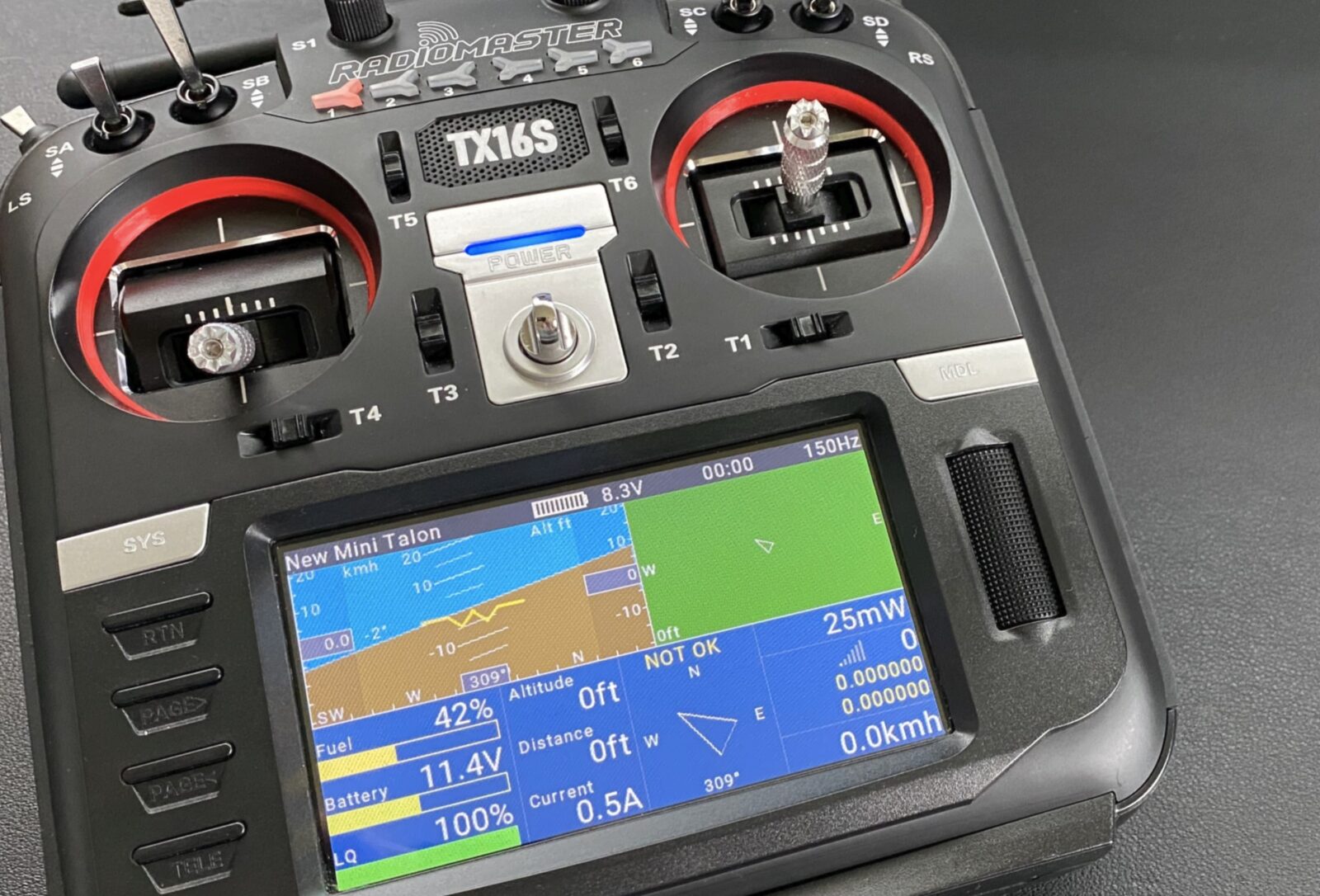 As of the date of this post, I have produced 42 OpenTx tutorial videos including 17 Beginner Videos and 25 Intermediate/Advanced Videos. I stopped logging flights when I reached 2000–in 2016. I logged all of that flight time on OpenTx. I’ve flown every fixed wing format you can imagine from highly complex and computerized long range FPV ships to basic 3 channel park flyers with OpenTx. I’ve produced 41 build videos for my YouTube channel and I’ve even flown a few quads, but no helicopters.

The funny thing is, even with my experience in the air flying everything imaginable with OpenTx, I consider myself an intermediate level user. While I’ve written some relatively complex setups in OpenTx, I am still amazed at what I see others accomplish with the programming capabilities of this software. Even more impressive to me is to watch the OpenTx Forums where the developers regularly exhibit their deep understanding of how and why OpenTx works the way it works.

The Elements of OpenTx

In addition to the programming interface on the radio itself, OpenTx also provides a desktop software interface known as OpenTx Companion–or just Companion. 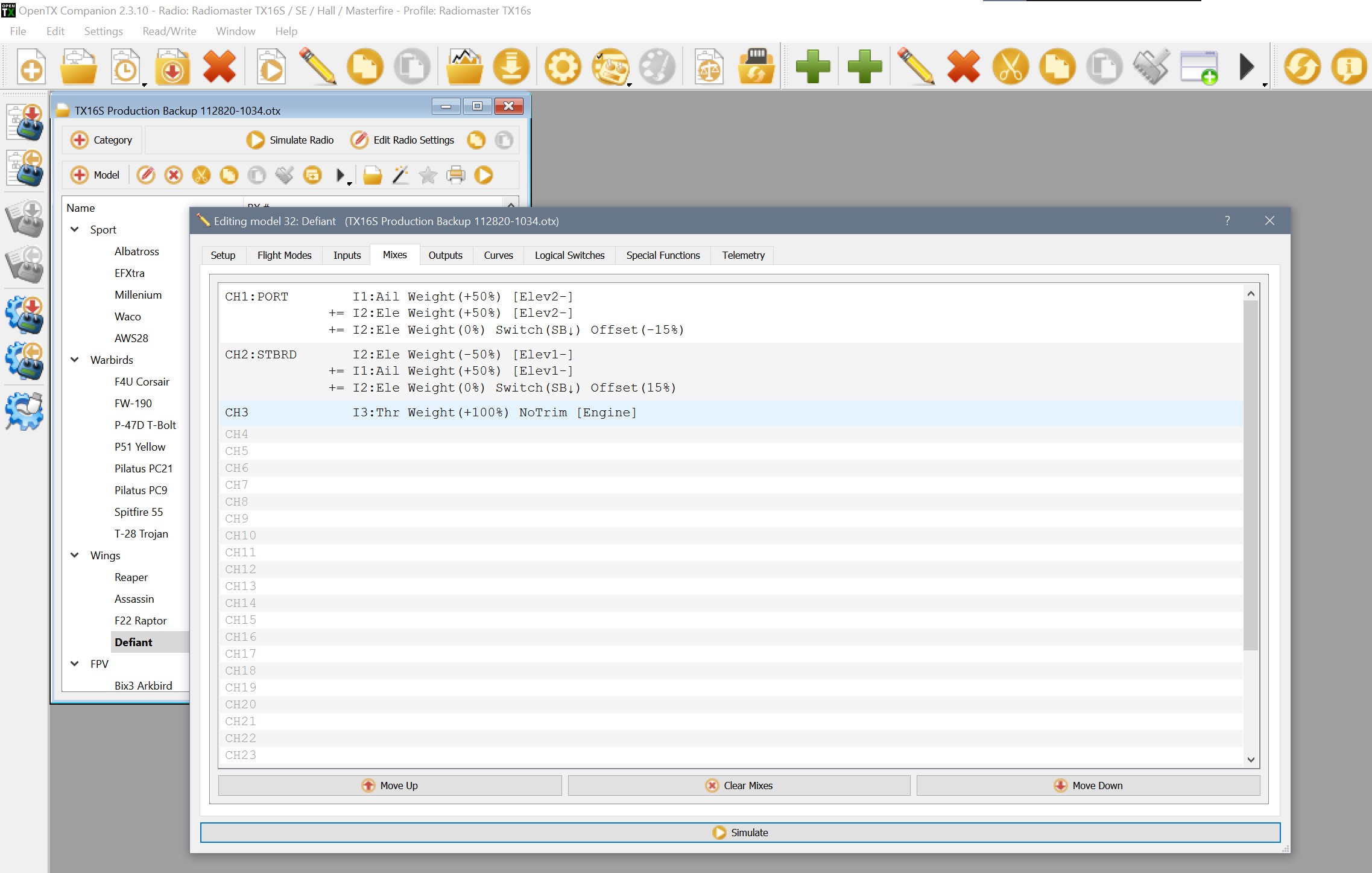 Companion allows you to use your computer to program model setups, backup your radio including models and settings, run a simulator to verify model setups, and synchronize your SD card to your PC. It is a highly competent piece of software at any price, but OpenTx developers give it away for free. That’s right, free.

Speaking of developers: OpenTx is in a constant state of development. When a new OpenTx revision is released, you can bet the next revision is not far behind. These days, the development cycle has as much to do with the product release cycle as it does for adding features/functions or fixing bugs. OpenTx has also adopted the Multi-Protocol Module allowing OpenTx based radios to bind with most mainstream receivers on the market today. So in addition to the radio firmware, the user has to decide when to update the Multi-Protocol Module firmware as well.

As a Radio Control software platform, OpenTx is the most sophisticated option available in the world today. I have yet to think of a task I couldn’t accomplish on the radio. OpenTx has myriad programming options from Global Variables, Logical Switches, Special Functions, Global Functions, Telemetry, Voice Prompts, Multi-Protocol Support, and the most configurable Inputs, Mixes, and Outputs I’ve seen on any platform. 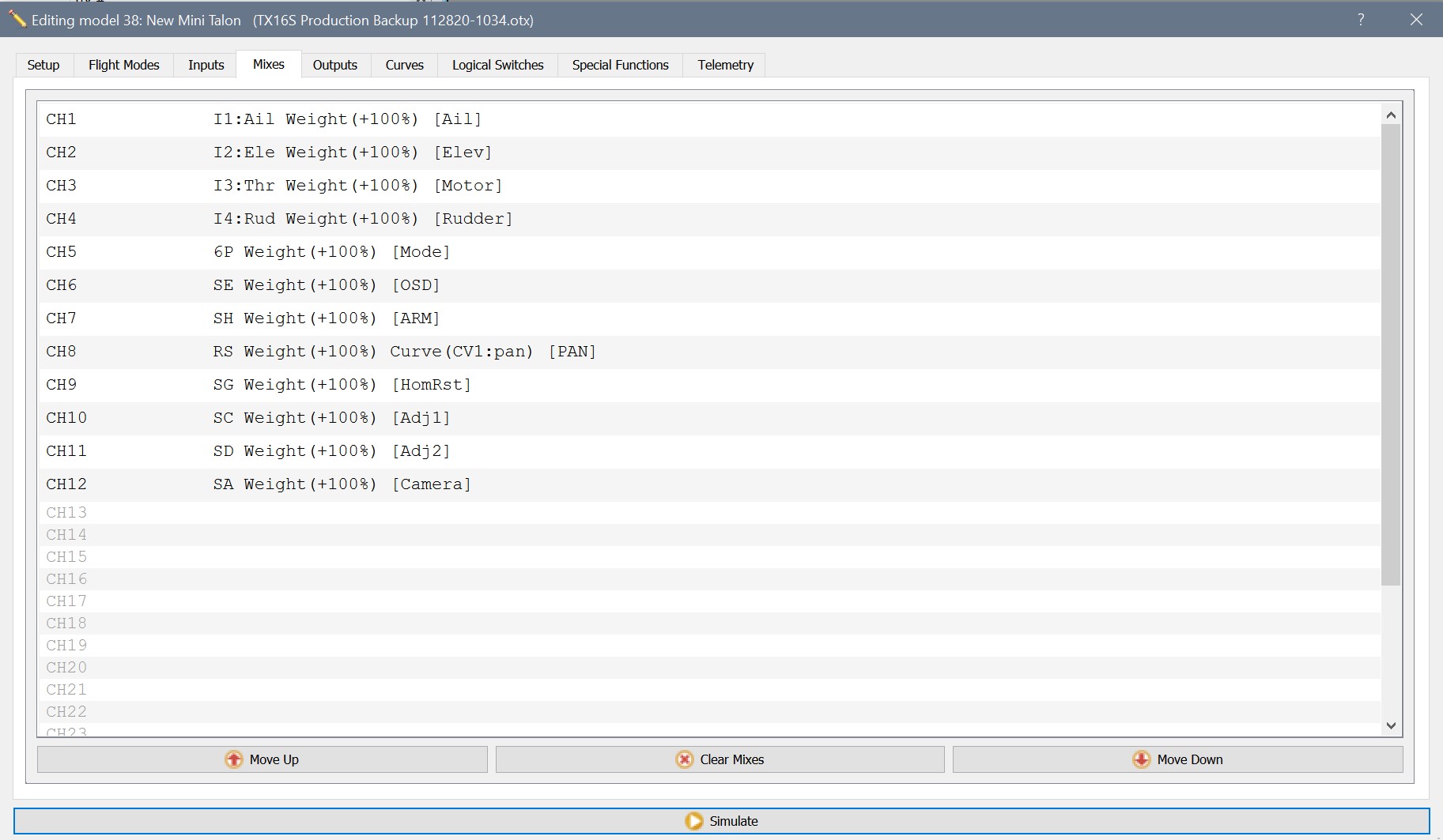 Unfortunately for the uninitiated, this maze of programming capabilities, desktop programming, MPM updates, and OpenTx firmware updates can be daunting. Sure, if you’re a 20 something who grew up with an iPhone in one hand an an Arduino Development Environment in the other, OpenTx may not represent much of a challenge, but if you are less technically savvy, you might wonder what you got yourself into the first time you fire up the radio or take a look at Companion.

Making Sense of It All

As the author of 42 video tutorials on the subject, I get something most people don’t: Questions. Lots and lots of questions. When I post a tutorial video I get questions about how, why, when. Some questions are aimed at learning more about the topic, some challenge “why?”  Questions range in temperament from inquisitorial to indignation. I often hear statements such as, “I don’t want to do all of that, I just want to fly my plane”. 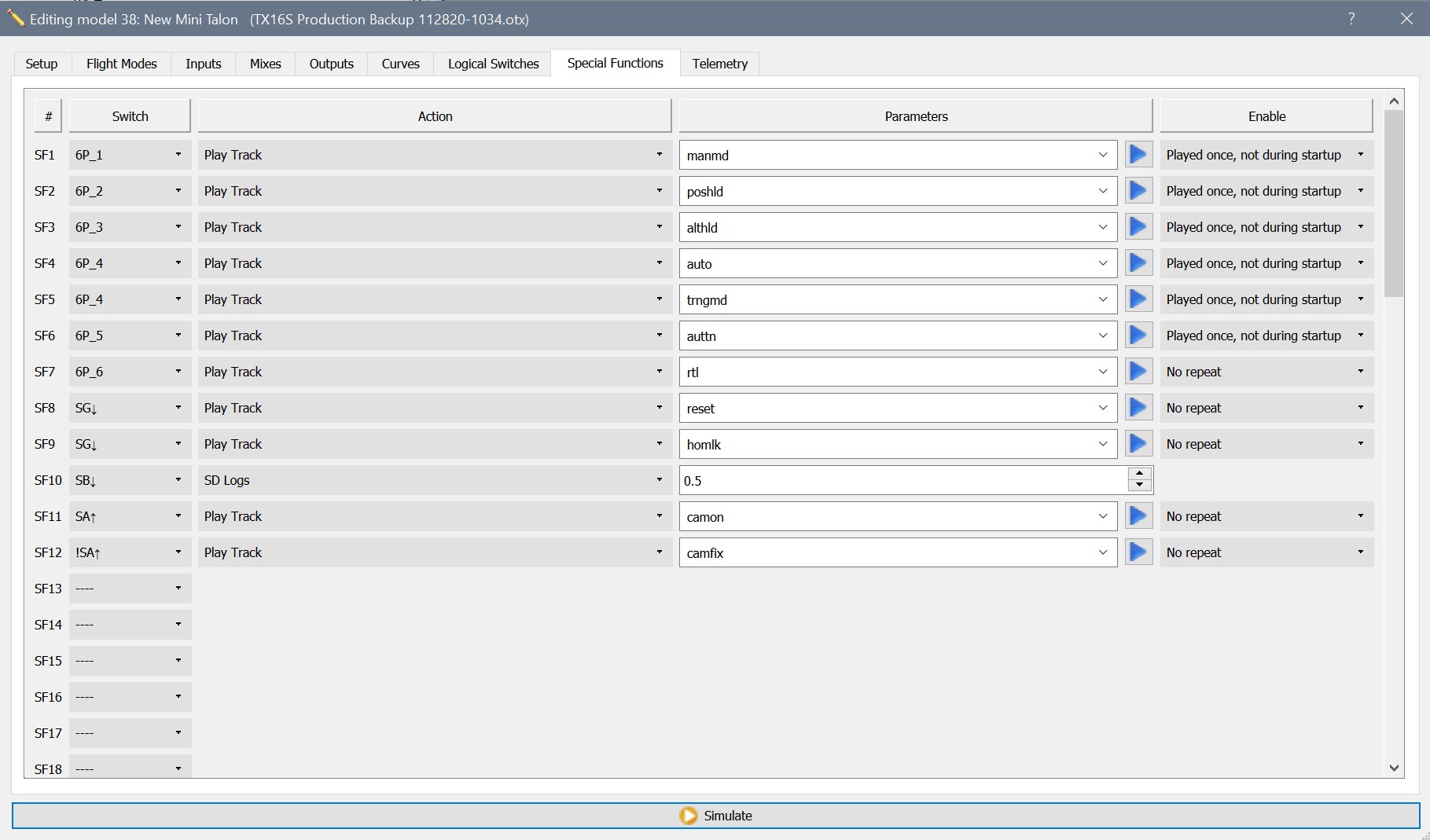 For the rest of this article, we’ll focus on only two things: Big Blocks, and What You Need to Know. Note: This article assumes a Mode 2 radio.

OpenTx has lots and lots of details, but it only has a few Big Blocks. If we can break the software down into Big Blocks, your job of understanding what to do will get much easier. You can worry about the minutiae later. If you are new to OpenTx, make sure you understand these Big Blocks first.

You should stop here and take in those four points above because the next part is going to blow your mind. In order to setup a model and fly it, all you need are sources in the mixer and a bound receiver.

That’s right: You can simply add 4 channels to the mixer, bind a receiver, and fly the plane. You need nothing else. 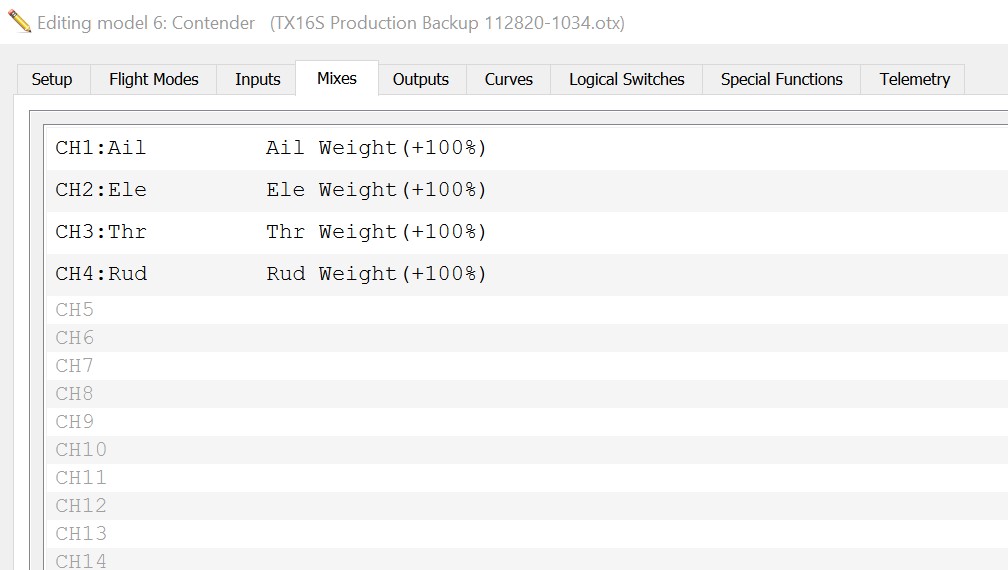 What You Need to Know

One of the biggest complaints I hear from people about OpenTx is “it’s too hard” or “it’s too complicated”  So, my question back: Does the configuration above look “too hard” or “too complicated?” To further dispel the absolute nonsense about OpenTx being too hard, I’ll let you in on a dirty little secret: I can make a basic four channel fixed wing setup in 7 clicks from scratch. Seven Clicks. All of them are either pressing enter or exit. Don’t believe me? Let’s make one. Turn the radio on and get to the home screen.

You just created a fully functional four channel model in OpenTx with 7 clicks of the buttons. Bind your receiver and go fly. I can hear the “buts” starting already:

Every single one of these items is an optional added complexity. OpenTx will happily accommodate these capabilities with just a minor bit of effort on the part of the user. For example, want a throttle cut?

I’ve had limited exposure to other radio operating systems and can tell you with that exposure, none of them were as easy as OpenTx to add a functional model. As I consider the real complaint behind programming OpenTx, I don’t believe it has anything at all to do with complexity. I believe it has to do with change. Humans have a tendency to resist change.

Switching from Futaba, Spektrum, HiTec, or any other programming interface requires some effort to learn a new way of doing things. It’s not harder, it’s not easier, it’s just…different. For those of us who started with OpenTx, I can assure you, looking at a Spektrum interface is just as disturbing.

The good news about switching to OpenTx though–options. The multi-protocol module available on 4-in-1 radios gives you the ultimate flexibility to manage your spend. You’re no longer strapped to $60 receivers and $300 6 channel radios. Why pay those sky high premiums for fractional functionality? Spend one rainy Saturday afternoon watching a few YouTube videos and you’ll be able to get a model setup with no other reference in about….7 clicks.

2 thoughts on “OpenTx – What you Need to Know”