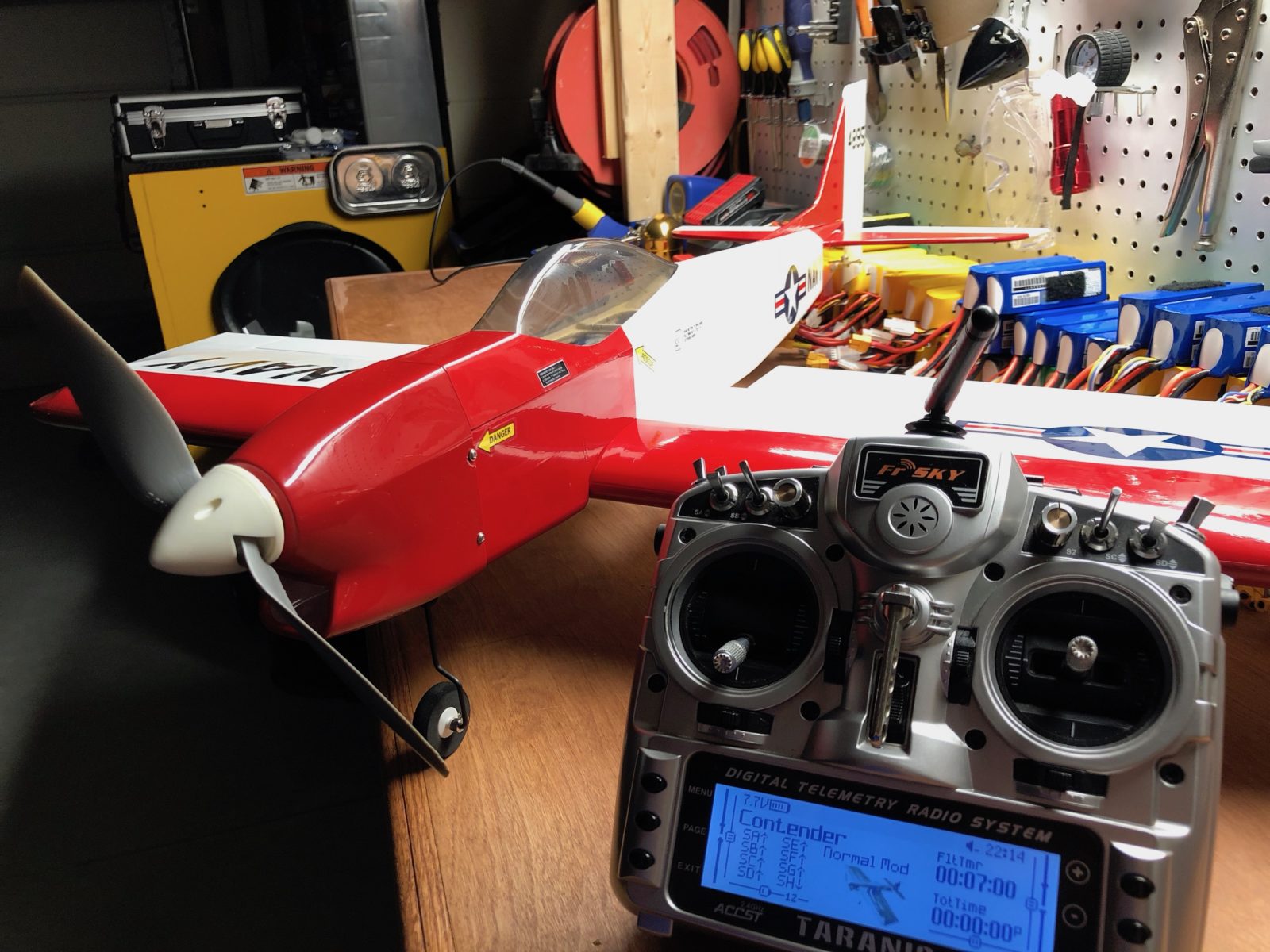 This article details the build review of the Top Flite Mini Contender ARF from Tower Hobbies. Overall I’m happy with the outcome. As-is the case with all builds, there were a few little annoyances, but they were relatively insignificant. The model was square and true with nothing more than some light sanding and drilling of a few pilot holes to finish the build. I would definitely buy it again.

Covering: This plane has a bad reputation for the covering being slack and difficult to work with. In my unbox video I show just how lose this covering is from the factory so no disputing this point: The iron on covering on this plane has more wrinkles than any other ARF I’ve encountered so far. With that out of the way, I have to say there was nothing particularly difficult about resolving the issue. The heat gun took care of covering over open cavities and the iron took care of the rest. So I took one point off the pre-build score as it did take some time to fix this before starting the build but it was difficult to fix.

Servos: The manual calls for 21 oz-in Micro Servos. So that’s what I bought, but they didn’t fit in the servo openings for the ailerons or the rudder/elevator without trimming the openings. Overall, not a big deal to correct. Just beware you may have to open the mounting holes up if you use servos other than the recommended Futaba’s.

There were no other pre-build issues.

As long as we’re talking about balsa planes and not EPO ARFs, it really doesn’t get much easier to assemble than the Mini Contender.

‘Lotsa Collets: The Mini Contender used [lots of] collets to splice controls rods together with z-bends on both ends. Here’s a snippet from the manual. I’ve never seen a kit (ARF or otherwise) use this technique. Upside: Adjustability is there providing easy method to adjust control surfaces after trimming. Downside: More moving parts on the control rods = More failure points on control rods.

Landing Gear Straps: The manual doesn’t mention this, but you’ll want to drill some pilot holes in the hardwood landing gear supports. I stripped one screw head trying to drive the screw without a pilot hole. The pin vise made short work of adding pilot holes…then the job got much easier.

Everything Else: Aside from the pushrod collet thing and the predrilled firewall being Rimfire specific, everything else on this plane utilized what I’d consider traditional build techniques. For example, the ailerons used normal in-wing servos with clevis connectors on the control surface horns and z-bends on the servo horns. The steerable nose wheel is a standard block/horn implementation sharing the opposite arm of the rudder on the same servo.

Stabilizer Saddle: I didn’t get a photo of it, but the saddle for the horizontal stabilizer was not quite right. With the stab inserted, it was not parallel with the main wing meaning the saddle had to be sanded until the stab was parallel with the main wing. I’ve seen this in other models before so not a big deal to correct, but it would have been nice if I didn’t have to.

The RC Video Reviews.com Buy Again Score describes the likelihood of whether or not I would buy this plane again now that I’ve built one. For the Top Flite Mini Contender, the answer is a resounding yes. Of course there were a few issues/oddities: Covering wrinkles, size of servo openings, and linkage collets. None of them are show stoppers though.