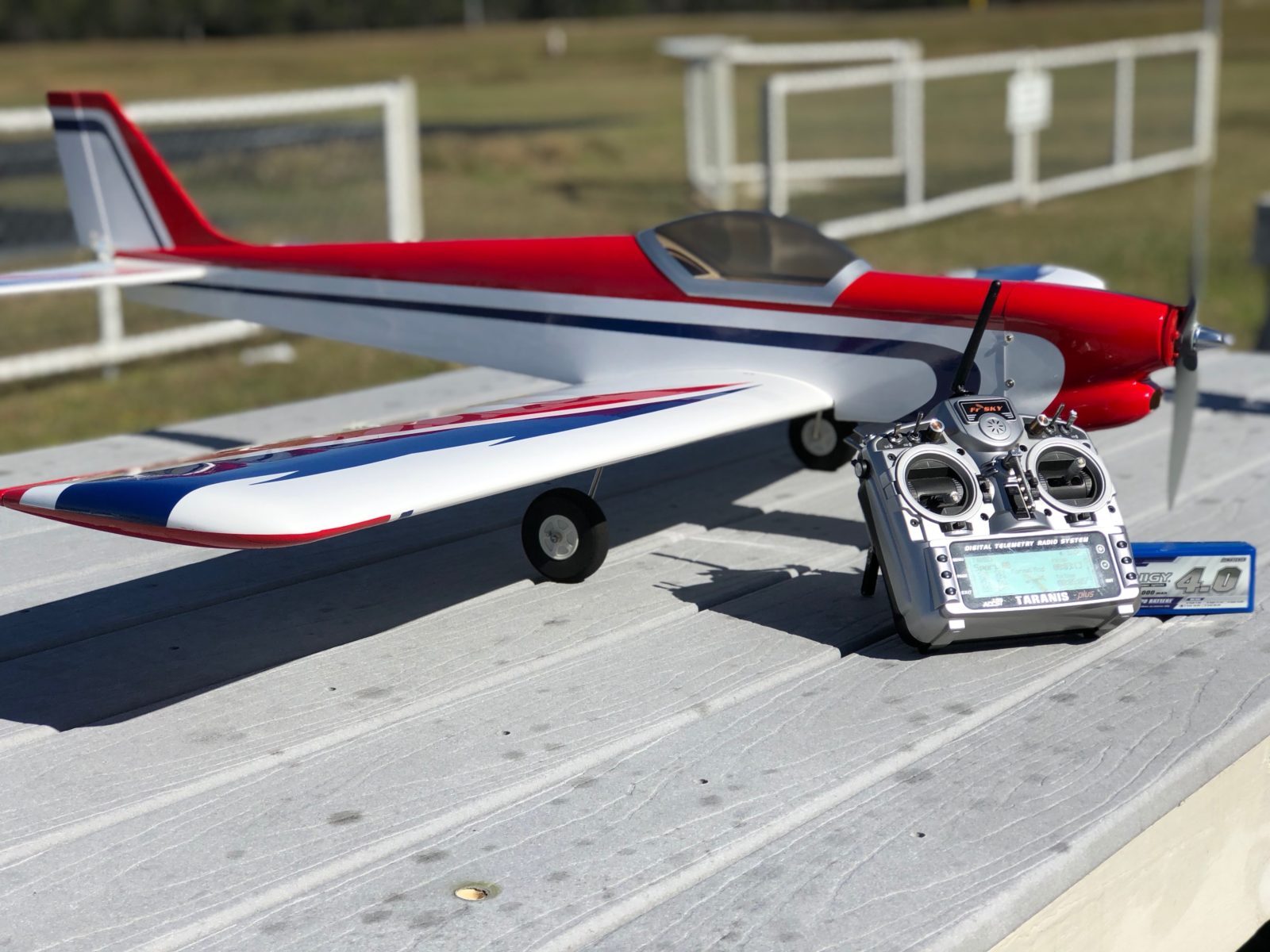 The Tower Hobbies Sport EP ARF is a 60″ wingspan low wing sport airplane Tower characterizes as a “kick back” plane. I think Tower hit the nail on the head with that description because in the air that’s exactly how it flies. This article is about the build though, so if you’re interested in this plane, enjoy the read. If you want to see it fly, here is the maiden flight on YouTube.

The Tower Hobbies Sport build process is similar to every other standard ARF with a few enhancements that make assembly a breeze. Before I get into the build details, I’ll point out the Sport is frequently on sale at Tower Hobbies for less than $90. With their regularly posted coupon codes, super saver club discounts, e-cash, and gift certificates they frequently offer with other product purchases, it is possible to get this plane for less than $80 shipped.  Considering you get a well designed and well built 60″ ARF with a complete hardware package, the value equation for this airplane is quite high.

For comparison purposes, I also just bought/built the Top Flight Mini Contender. Even though I bought that plane on sale, the little 36″ ARF cost me about $15 more than the 60″ Sport. Tower has a great formula on their balsa ARFs. I hope they keep these great deals coming.  Ok, onto the build…

All control surface hinges are pre-installed. Empennage iron on covering is removed at the glue points. The horizontal stabilizer is slotted to accept to the vertical stabilizer making tail feather assembly a piece of cake. The airfoil saddles were all perfectly square and aligned meaning all airfoils installed parallel where they need to be parallel, and perpendicular where they need to be perpendicular. I don’t want to understate how important this is for a straight flying airplane. So bottom line: This plane goes together as well or better than any other plane I’ve assembled aside from a couple of minor gripes I detail below.

The Watt Meter video linked below shows the power I made on the G32 brushless motor. 55amps is just a little bit too high as the spec calls for 50a max; however, the next smallest prop I have on hand is a 10×6 which made too little power at ~750watts. So I ordered an 11×5.5 and I think that’ll do very nicely for this plane and motor.

This plane required a little bit of work on the shrink covering and the wing servo openings. There were no other repairs/adjustments required before starting the assembly.

The book says the plane supports mini or standard size servos. The opening is for mini servos and the opening can be enlarged to accept a standard servo. Unfortunately Tower still sells servos for $20, so I buy servos elsewhere for much less. I usually look at the specs of the servo Tower recommends and find a comparable alternative. In this case, I used a 25oz-in Mini Servo from Turnigy and of course it didn’t fit. The smaller Turnigy servo on the bottom is too small fore and aft to be screwed into the opening. Fortunately, I had 4 standard size servos, so I enlarged the opening and used standard servos for the ailerons.

Take a look at the Sport Unbox video below to get an idea of how much work the iron-on covering is going to take. Overall it’s not a big deal, and it doesn’t take that much time. My frustration with these loose applications of shrink covering are that companies like Phoenix Model can deliver ARFs with nearly flawless applications while Great Planes, Top Flite, and Tower planes frequently need work. So, not a big deal in the grand scheme of things, just be aware, you’ll probably need to do some work on the covering.

Ease of Build – 5/5 – You will not find an easier Balsa ARF assembly than the Tower Hobbies Sport.

Tower puts extra effort into making the Sport easy to build from removing shrink covering over glue joints to pre-hinging the control surfaces, the tedious tasks are taken care of out of the box allowing you to get right to the fun stuff–putting big parts together.

Since I didn’t use the recommended Rimfire motor, and I know Tower tends to have firewalls/motor mounts drilled for Rimfire motor bolt patterns I wanted to find out right away if I would have to perform surgery on the firewall to fit the Value Hobby G32. Fortunately, the X-mount for the G32 bolted right up. I started each of the X-mount screws, then snugged them tight.

I took this picture to show the angle your driver is forced to use when mounting the motor box to the airframe firewall. The motor box firewall has about a 2″ diameter hole leaving plenty of space for the brushless motor shaft and enough space to get your screwdriver in to reach the mounting screws, but the driver cannot reach the screws at a perpendicular angle due to the front firewall. Just be careful to avoid cross threading the screws or blind nuts.

The G32 brushless motor mounted to the plane. Note the rounded top corners on the motor box required to fit the cowl. The G32 is a 4250 800kv motor and fits the Sport perfectly.

If you’re wondering why I don’t just buy the recommended Rimfire motor, it’s because I believe they’re overpriced. Don’t get me wrong, I like them. They look, feel, and sound like quality equipment; however, they’re normally somewhere around $100. The G32 from Value Hobby basically has the same specs for 1/3rd the price. I decided I needed to know how well the G32 stacked up against the Rimfire. Regarding power development, here’s the answer:

Now, I still need to fly the plane with this motor for a while to see how it stands the test of time. The Rimfire motors I have in my hangar work every time, they’re whisper quiet, and I know I can trust them. Will the G32 prove as reliable? I guess only time will tell, so stay tuned.

The landing gear on the Sport is stout. The nose wheel mechanism is straightforward to install. You will need to open a slot in the cowl to accept the nose wheel strut. Make sure to use thread locker on the steering arm lock screw and the wheel collars.

The cowl does not have an airflow opening from the factory. If you run an electric setup, don’t make the mistake of installing the cowl as-is. A little bit of masking tape and a narrow sanding drum on a rotary tool (dremel) make short work of creating an opening to let your electronics breathe.

This hole will let the air flow over the ESC and battery to keep things cool inside the plane. I don’t understand why manufacturers cannot make molds with airflow holes designed in. Personal experience tells me it’s a bad idea to fly electric planes–especially larger planes with larger electronics–without ventilation. They obviously understand the concept of ventilation because the belly of the plane has ventilation slots and the instructions tell the builder to remove shrink covering from over the slots if using electric power. So why can’t the cowl come with ventilation up front? Ok, moving on…

The Wing and Everything Else

I don’t see much point going on about assembling the wing, control horns, or pushrods since all are standard fare for this type of plane. The wing spar is about a 1″x5″ piece of hardwood with slight dihedral. There is an alignment pin to keep the trailing edges aligned. If you’re reading this far, you already know the drill on this. Epoxy the spar in one wing half, spread epoxy on the exposed spar and inward ribs, slide wing halves together, and clamp until dry.

There is nothing notable about any other part of the build. Typical control horn, pushrod, and electronics installation.

Here is a shot of the Tower Hobbies Sport on the ground next to our family dog to give you an idea of the wingspan. It is an impressive plane on the ground and in the air.
[Jazzy is a 12lb Havanese]

I’d easily buy the Tower Hobbies Sport again. It’s hard to beat the combination of value, ease of assembly, attractiveness of design, and flight characteristics. It goes together easily with thoughtful touches like notched tail feathers, pre-hinged control surfaces, and simple robust landing gear that should easily take a lot of landings. I’ve built and flown at least 40 airplanes. This one ranks highly in that group of planes because it just works.